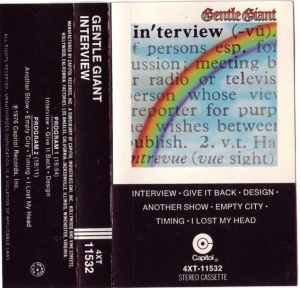 A concept album, structured as a phony interview. The music contains numerous criticisms of the music industry and the silly questions that rock stars get asked repeatedly.

Interviewer: Gentle Giant, how would you describe your music?
Band: [All talking at once] Well/Well, I guess...combination of...background...very arranged...basically it's all different sorts...

Interviewer: So, really, when come right down to it, can you describe what kind of music you do play then? What are you playing at? What would you compare it to? How would you express to people who've never heard it?

I Lost My Head

Interviewer: Thank you very much, then, and good luck to you.
Band: Thanks/cheers/Thank you...

These liner notes are reproduced with the kind permission of the Terrapin Trucking (UK) Ltd. Transcribed by Malcolm Smith.

"Gentle Giant's newest album, Interview, is their eighth. It contains distinctive elements of the musical styles and recording techniques that the previous seven generated, and, as usual, takes their accomplishment a step further. It relies on strong themes, precision and energy."

So runs the opening paragraph of the program for GG's 1976 UK tour, their last on home soil. As a summary of the album it is concise and to the point, but its matter-of-fact tone hides the intense pressure under which Interview was recorded.

Barely a year into their new contract with Chrysalis, Giant were in the middle of the most hectic period of their ten year career. The success of their previous album, Free Hand, had been due in no small part to the tireless efforts of the band to promote it, including extensive tours of North America, Europe and Britain. Into this punishing schedule had to be fitted the time to write, rehearse, and record new material, and the pressure to produce a worthy follow up was considerable, both from the commercial and personal points of view.

That they succeeded is a tribute to the exceptional professionalism of the band. In just four weeks, Interview was painstakingly developed from an incomplete set of basic ideas to the meticulously crafted final product. This relatively short recording time was not, in itself, unusual for Giant, The band would normally reckon to spend around three weeks recording an album, which considering the complexity of the music was far from comfortable. But Giant were never a band to choose the comfortable option - from the beginning, they had ploughed their own furrow with a determination bordering on obsession, and by the mid-seventies they were beginning to reap the rewards, especially in America and parts of Europe.

Now, faced with the prospect of maintaining the buzz generated by Free Hand, Giant had booked the customary three weeks studio time to fashion a new winner. Having had just a month's break from touring in which to write and rehearse, the band entered the studio less well-prepared than they might have liked. The sessions for Interview would, in fact, stretch to four weeks, with the group having to grab studio time wherever they could to complete the album. It was, predictably, a very intense period, but keyboardist Kerry Minnear doesn't consider that was a drawback: "We needed the pressure to write - I think it's quite significant that nobody's recorded anything since the band split up, because there's not been that pressure to write, but the pressure was there on Interview and it produced results."

It also produced a situation in which Kerry was stuck in a basement playback room at Advision, with only a guitar and a tape recorder for company, busily writing new material for the album, while the rest of the band pressed on with recording upstairs. Exceptionally, all the parts for one piece, Design, were written out on manuscript, taken up and distributed to the other members of the band, and the number recorded without anyone but Kerry knowing how it would all fit together. He was far from comfortable with it: "we didn't like working that way, we were a band, we worked together as a band, and this was a band album."

For the most part, though, it was business as usual. Before committing anything to tape, the material would be played through live in the studio. Alterations were made, arrangements agreed upon, then the time-consuming process of actual recording began. Giant had steadily refined their approach to recording from early in their career. The utmost care was taken to achieve the exceptional clarity which characterised their albums from Octopus onwards. By the time Interview was recorded, their production techniques were well in advance of most of their contemporaries, with bassist Ray Shulman the man most responsible for shaping the band' s distinctive sound. "recording is such a laborious process" he said at the time. "If it wasn't our band, I just couldn't be there...I just couldn't stand it." He must have had a change of heart since then, because these days he makes his living as a producer with albums by Ian McCulloch, The Sundays, and The Sugercubes to his credit.

Interview itself could loosely be described as a concept album, although there is no common lyrical thread running through the songs as there is on the earlier Three Friends (1972) and The Power And The Glory (1974). The title track is a sideswipe at the lack of imagination shown by most journalists interviewing the band, and at several points the album's tracks are linked by brief snatches of conversation between "sounds" writer Phil Sutcliffe, a long-standing Giant admirer, and the group. Giant co-opted Sutcliffe to perform this mock interview, then spliced excerpts between the songs themselves, which stand as the band's responses to his questions. The whole album thus forms the interview of the title.

The music, as always, defies any general description; Empty City is a number which follows in the Giant tradition of delicate vocal interplay. Timing boasts a glittering cascade of jagged rhythms running almost totally contrary to Derek Shulman's vocal line, whilst I Lost My Head is a two-part song which demonstrates both the lighter and heavier sides of their character. Throughout, the instrumentation is somewhat simpler than on previous albums. When recording was complete, Kerry observed that there were no cellos, flutes, recorders, or vibes on the album. "maybe it's rock 'n' roll!" joked Ray.

With albums like Interview, Giant had put a good deal of the "progress" into progressive music. But the proverbial wind of change was about to blow through the world of rock, and this was to be the last album the band would make as a purely progressive outfit. With the New Wave came new energy, new ideas, and new standards, and Giant would soon re-assess their approach in the light of changing circumstances.

The BGO is missing the last interview after "I Lost My Head."

The first DRT Entertainment release of In'terview was accidentally missing one stereo channel. This defective version was recalled from stores and a corrected disc was released. The original bar code (defective) is 28730 03532. The newer (fixed) bar code is 28730 03572.