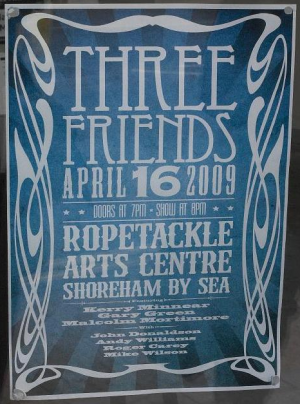 This is not a Gentle Giant reunion. It's a new band.

See the official schedule for the latest information.

In place of orchestral instruments such as violin and cello, Three Friends is using virtual synthesizers and samplers.

On October 17, 2008, the band debuted, calling themselves "Rentle Giant," at Coolham Village Hall, Coolham (near Billingshurst), West Sussex, UK. At that time, Kerry and Mike were not in the band. They played "Prologue", "Playing the Game", "Think of me with Kindness", "The House, the Street, the Room", "The Boys In the Band", "Plain Truth", "Just the Same", "Advent of Panurge", "His Last Voyage", "In A Glass House", "Giant", "Peel the Paint" and "Mr Class & Quality."

Apparently there are recordings locatable via the Dime a Dozen torrent site.

These are excerpts only...