This 2-CD Gentle Giant anthology from Polygram UK contains material from Gentle Giant, Acquiring The Taste, Three Friends, Octopus, and The Power and the Glory. The recordings have all been remastered. The set comes with a 12-page booklet containing an original essay and several photos.

The album was originally going to be called "Dusky Voices," but this name was dropped. Nevertheless, some CD catalogs list "Dusky Voices" as a Gentle Giant album.

Some copies of the album have a sticker that states: "Includes many tracks previously unavailable on CD." This is an error. All of the songs have previously been released on CD, but it's possible that some alternative master tapes were used. Most notably, this set is the only CD release containing a correct recording of Acquiring The Taste (song) without the defective "bend" found in most other copies. 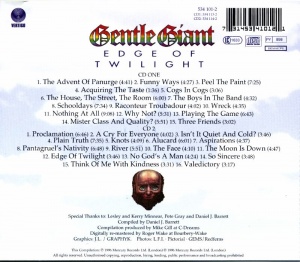 Dan Barrett compiled this CD set on request from Polygram. He selected the tracks, wrote the liner notes, and provided extensive production notes to the engineers to avoid the mastering errors that had plagues earlier CD releases.

There is no other band quite like Gentle Giant. Mention them to the average person today, and you'll likely get the response, "Who?" But in 1994, Gentle Giant was ranked 77th in the prestigious Record Collector poll of the Top 500 Collectible Artists. That's pretty impressive for a supposedly "obscure" progressive rock band that broke up in 1980.

What accounts for this strange inconsistency? When Kerry Minnear, Gary Green, Martin Smith, and brothers Derek, Phil and Ray Shulman formed Gentle Giant, they decided to concentrate on compositional quality, rather than use cliches and flashiness to please the masses. As a result, they created a strange and wonderful music that may not appeal immediately to the ear but, like fine wine, sits in the soul and slowly ferments into something pleasureful. This turned away potential fans who did not have the time to listen closely. But those who did were rewarded with music of unparalleled richness and depth.

The secret to Gentle Giant's longevity is in the variety, depth, and beauty of the music. For variety, their influences spanned rock, jazz, blues, Renaissance music, 20th-century classical, and the outright bizarre. The band members collectively played more than 30 instruments - even in their live shows - adding strings, brass, woodwinds, harpsichord, and homemade percussion to the usual rock lineup. All members sang, with lead vocals handled mainly by Derek (the hard-rocking voice), Kerry (the soft, ethereal voice) and Phil (somewhere in between). For depth, they wrote music in the classical tradition, with themes, counter-themes, and intricate harmony, even in their most head-banging songs. And through all this complexity, the music retained a subtle beauty that has kept it in fans' stereo systems to this day.

Gentle Giant were not afraid to take chances, and it shows. From the wah-wah violin in Plain Truth to the percussion ensemble in Edge Of Twilight to unspecified electronic devices found lying around the studio (River), Gentle Giant kept their recorded works full of surprises. Their lyrics drew material from such diverse sources as mythology (Pantagruel's Nativity and The Advent Of Panurge), poetry (Knots), and sailor songs (Wreck). Their first concept album, Three Friends, dealt with the pains of childhood playmates who grow apart as they grow up, moving "from class to class." Serious music? For certain. But the band members knew how to laugh at themselves too, even naming one of their compilation albums Pretentious - For the Sake of It.

This compilation brings together Gentle Giant's first four albums - Gentle Giant, Acquiring The Taste, Three Friends, and Octopus - plus their sixth, The Power and the Glory. The band's lineup changed little over their 11 years together. Drummer Martin Smith left after Acquiring the Taste, and Malcolm Mortimore took over for Three Friends. Following a motorcycle accident, Mortimore was replaced by hard-bashing John Weathers. Phil Shulman left after Octopus, and the other five members remained for seven more studio albums and two live albums.

Gentle Giant was an unusually strong debut album in the progressive rock vein, standing confidently alongside the first works of Emerson Lake & Palmer, Yes, Genesis, and King Crimson. Although tinged with elements of blues and 1960's British soul, the music is strikingly original, ranging from rock ensemble to string ensemble. The careful listener will hear a quote from Liszt's Liebestraum No. 3 in the middle of Nothing At All, and note that the backwards reverberation effect in Alucard matches the title of the song ("Dracula" spelled backwards).

Acquiring The Taste was perhaps Gentle Giant's most experimental album. The original liner notes stated that the band's goal was to "expand the frontiers of contemporary popular music" and not resort to "blatant commercialism." From the opening synthesizers of Pantagruel's Nativity to the closing crash of Plain Truth, it's clear that this album was the result of long compositional effort.

Three Friends encompasses many styles as it follows the lives of the three schoolmates mentioned earlier. The title track, in my opinion, represents Gentle Giant's most beautiful work. If you listen carefully, you may also notice that the song's slow, majestic bass part is note-for-note identical to the random-sounding bass that opens Mister Class And Quality?. (Gentle Giant loved to build this kind of internal consistency into their albums.)

Octopus is a harder-rocking album, opening with The Advent Of Panurge, a sequel to Pantagruel's Nativity from Acquiring The Taste. Panurge and Pantagruel, two mythological French giants, meet by a bridge, where Panurge answers Pantagruel's questions by speaking in every language under the sun... except French. (Hence, the nonsense syllables in the middle of the song.) The many stand-out tracks on this album make it a favorite of numerous fans.

The Power and the Glory was Gentle Giant's second concept album. Rumored (incorrectly) to be about Richard Nixon and the Watergate scandal in the USA, the album tells the story of a leader who rises to power and becomes corrupted by that power. Notice how the political promises of the opening Proclamation ("It can change") are reversed in the final Valedictory ("Things must stay, there can be no change"). The album also contains one of Gentle Giant's most complex works, So Sincere; its quirky rhythms often leave people scratching their heads until they've heard the piece several times.

A major factor in the band's recent popularity has been the rise of the Internet. For the first time, fans worldwide who thought they were the only ones who remembered and loved Gentle Giant suddenly found themselves in contact with thousands of other people who felt the same way. In 1992, Geir Hasnes of Norway began publishing Proclamation, an outstanding quarterly magazine devoted to Gentle Giant, and he publicized it via the Internet. In addition, 1994 saw the creation of the Internet Gentle Giant mailing list, On-Reflection (by Malcolm Smith of the USA), and the Gentle Giant Home Page (by myself), which appeared in the November 1995 issue of Q magazine. Every week, I receive several electronic mail messages that read, "I can't believe there is a Web page devoted to Gentle Giant! They were my favourite band, and I thought everyone else had forgotten about them."

If you are new to Gentle Giant, then welcome! You've never heard anything else like them before. As you listen, be patient: the music can be an acquired taste. Don't expect to master the music in a single listening and walk away snapping your fingers. It may take several (or many) listenings for the full power and glory of Gentle Giant to reach you. But it will be time well spent.