Martin Smith was Gentle Giant's original drummer from their days in Simon Dupree and the Big Sound. He played on their first two albums, Gentle Giant and Acquiring The Taste.

According to a friend, "Martin was a wonderfully sympathetic drummer who could play all styles (except possibly funk) very convincingly. He was particularly good playing jazz/blues... he was never musically phased, no matter what was thrown at him." 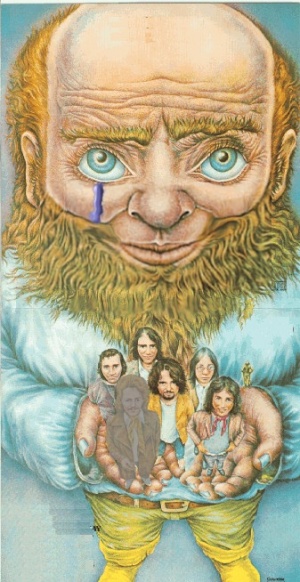 Picture created by Toby Trott in memory of Martin Smith

Sadly, Martin passed away on March 2, 1997, of internal hemorrhaging. He was 50 years old and apparently had been very ill with a blood disorder for five years. He continued drumming up until 2 months before he died, though he needed help setting up his drums. His funeral was attended by 150 people, many of them fellow musicians, and Gordon Haskell (of early King Crimson fame) wrote the eulogy.

Martin was last spotted playing drums back in early 1995 for The Bruce Roberts Blues Band, in a pub in Warminster, England. The band also included Gordon Haskell on bass and ex-Jess Roden members. At the time, Martin seemed in good health and seemed to be enjoying himself. He said he was living in Southampton and stressed that the band was part time, without mentioning any other projects.

After his work with Roberts, he did a few lightweight blues gigs with the Bad Penny Band around Southampton.