A concept album, supposedly about how people who live in glass houses shouldn't throw stones. But this short explanation does not do justice to the album, which is a complex tour-de-force.

The album cover is overlaid for a three-dimensional effect. On the original vinyl, the overlay was cellophane, and on the Terrapin CD, the overlay is printed directly on the jewel case. The Alucard CD recreates the vinyl's artwork even more accurately in a custom digipak.

Speaking of the cover, the UK vinyl release (WWA label) and the German release (Vertigo label) are mirror images of one another.

The original album was never released in the USA, but was in great demand as an import.

The sounds of breaking glass that open the album came from the BBC Radiophonic Workshop. The sounds are still used on BBC radio programs. (Thanks to Jeff Hall for this information.)

See the LP release from Chile. (Thanks to Pedro S. Leal.) 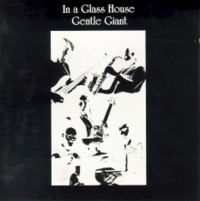 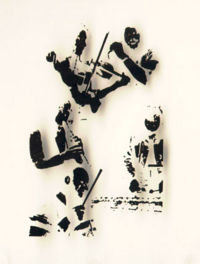 Ending of the album

The final music on the album is a collage made from songs on the album: The Runaway, Way of Life, Experience, In A Glass House, An Inmates Lullaby, A Reunion, and a final shattering of glass, echoing into the distance....

These liner notes are reproduced with the kind permission of Terrapin Trucking (UK) Ltd.

'In Britain, it's not been low profile, it's been no profile.' That is how vocalist Derek Shulman once memorably summarised the career of Gentle Giant, one of progressive rock's best-kept secrets.

That they remained so for much of their 11-year career from 1969 to 1980 was due to the antipathy of the music press which, with the exception of Sounds' Phil Sutcliff, steadfastly refused to grant them column inches despite their burgeoning reputation at the fan level. Not that Giant were for everyone: their complex, uncompromising music consistently polarised the Seventies rock audience. You either loved them or hated them, and despite a flood of retrospective praise since their demise that's how it remains today.

The Shulman brothers - Derek (vocals, sax), Ray (bass) and Phil (horns) - had reinvented themselves as Giant's nucleus after an unsatisfying two-hit career as Simon Dupree and The Big Sound, their biggest success coming with 1967's UK Top Ten hit "Kites". Vowing to go their own way, they signed with the prestigious Vertigo label, home of many great progressive rock outfits of the era, adding guitarist Gary Green and classically trained keyboard player Kerry Minnear (drummers varied) for four albums of uneasy listening which basically invited the listener to 'take us or leave us' - something certain to get up the rock press's collective nose.

The addition of a permanent drummer in John 'Pugwash' Weathers after the third of this opening quartet of releases, 1972's Three Friends, completed the jigsaw. 'We were realising we could rock as well as do nice tinkly things,' was Derek's typically blunt assessment of the difference the ex-Eyes of Blue and Grease Band sticksman made to the band. "He hit a solid offbeat and it worked ... it was very interesting because we were rather, well, prim.'

The other, final personnel change that preceded In a Glass House was a departure - that of elder brother Phil Shulman, who resumed his job as a teacher. With vocalist Derek doubling on saxes and recorder, his loss was less significant than Weathers' recruitment.

Three Friends had been Giant's first release to elicit interest in the States and 1973's Octopus had built of that. But Columbia (CBS here) were undergoing a crisis and, by all accounts, couldn't cope with the opening salvo of Glass House - breaking glass metamorphosing into a heavy rhythm as the opening track, The Runaway, kicked in with a typical Weather's salvo. Whether or not the stylus got any further across side 1 was uncertain: what is known, however, is that Columbia didn't see it as the album to revive their fortunes ... whereupon it promptly became one of America's top import albums, selling a cool 150,000 copies!

The band decided to tour the States on the back on this unexpected underground success, selling out five nights at the Whiskey in Los Angeles and pushing their next album (on Capitol) into the US Top 50. That was The Power and the Glory, and is another story altogether: consult this compact disc's sister release TRUCK CD 001 for further details.

The general theme of Glass House was that those who live in them shouldn't throw stones. Lyrics were, as ever, on the oblique side, and rarely the stuff of mainstream rock; An Inmate's Lullaby, for instance, married menacing percussion to the sanity/insanity debate. Musically, the album had a bleak, edgy feel which was reflected in the stark packaging - faithfully reproduced here in miniture. The smashing glass sound effect that opened the album was echoed in later releases with the sound of a video game (Free Hand) and a 35mm motor-wind camera (Civilian), each time setting up a rhythm and warning the listener to take notice.

Musically, the tracks rang the changes, moving from the almost medieval feel of Experience to the deliberately dated ambience of A Reunion, its brief two-minute duration conjuring visions of a 1920's Palm Court tea-room. The title track, a Celtic-tinged rocker, was perhaps a pointer to the more direct approach of the following album, The Power and the Glory, with particularly chilling vocals from Derek Shulman. A final reprise of the breaking glass introduction ended the album in decisive style.

Glass House was special visually as well as musically, from the cover design onwards - and the stage show reflected this, as John Weather's recalls. 'We did a helluva lot of rehearsing. And it was an event ... we really went overboard. For the Glass House tour we had a wall with projectors behind it flashing different things which cost us a fortune, about 30,000 pounds. All sorts of neat little tricks, good lighting ... we really made a show of it. It was put together like a West End musical, there was that much and attention went into it.'

Glass House was the first of Giant's two LP's for the World Wide Artists label. After The Power and the Glory, Gentle Giant went on to record six albums for Chrysalis before their 1980 split, when Derek Shulman and Kerry Minnear decided to come off the road. Having been there from the outset, of course, they were well-nigh irreplaceable. Derek is now a US record company executive, brother Ray an acclaimed producer with the Sugarcubes and Ian MuCulloch, among others, to his credit. John Weathers is the only Giant still on the road with Welsh psychedelic survivors Man.

Under-rated on its release and only sporadically available since, In A Glass House offers a satisfying taste of one of Britain's most technically accomplished rock bands.

- Michael Heatley. Many thanks for their assistance to John Weathers and Alan Kinsman.

The Terrapin CD has several pops and crackles. For example, listen to track 1, "The Runaway," at 6:32 (pop) and 6:35 (crackle). These do not appear on my vinyl copy. Greg Hajic reports that his CD doesn't have these defects.

The Terrapin track marker for "Inmates Lullaby" is 9 seconds too early; the last 9 seconds of "The Runaway" are part of track 2 when they should be the end of track 1.