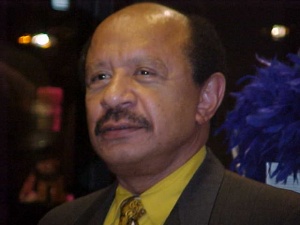 Sherman Hemsley (1938-2012), the actor who played George Jefferson on the TV sitcoms The Jeffersons and All in the Family, was actually a fan of Gentle Giant and other prog rock bands. In fact, on the TV show The Dinah Shore Show, Hemsley performed a dance to a Gentle Giant song.

On this particular occasion, the guest on the show was Sherman Hemsley, the guy that played the character "George Jefferson" on the shows "The Jeffersons" and "All in the Family." On that occasion he was going to perform a dance. To our shock and amazement, the music he danced to was none other than Proclamation from The Power and the Glory! After his dance, the host was laughing and asked what kind of music that was. Sherman then proceeded to give a 5 minute speech on Gentle Giant. The host stopped laughing when he realized that Sherman was 100% serious about Gentle Giant!

Boy was that a weird scene!

More information from "Scott" on yesfans.com:

I've known about this story & thought it was great. So about 10 years ago my buddy called me up and told me about a comedy club outside of Philly and the show that night was being hosted by none other than Sherman Hemsely. I asked him what time he'd pick me up.

We watched the show. Before every act SH came on to do some lame jokes and stories. Afterwards he was hanging out at the front of the stage non-chalantly talking with patrons. So I waited for my chance to speak with him. When I got my chance I asked about the story. He was taken aback and said; "ohh wow. yeah. that was a long time ago. how'd you know about that one. yeah Gentle Giant, they were great." It was a very cool moment.