Playing the Foole - A Stake in the Heart

This is a bootleg album on the TAKRL label. The following description is edited from reports I have received. The recording quality is not great -- it sounds over-compressed. However, the (live) performances apparently crackle with energy. Some are really better than on the official Playing The Fool. The record is marred by some ill-advised and clumsy edits.

The notes at the bottom of the album cover read: "Recorded on stage in January 1975 at the Utland Communicable Concourse/The Power and The Glory is from the studio/Edited by Deek himself/for him, sincerely/stereo/Takrl 1943." 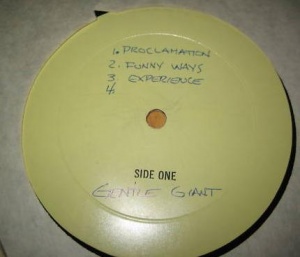 The LP
Retrieved from "http://gentlegiantmusic.com/w/index.php?title=Playing_the_Foole_-_A_Stake_in_the_Heart&oldid=7954"
Categories: