Difference between revisions of "User:Dan" 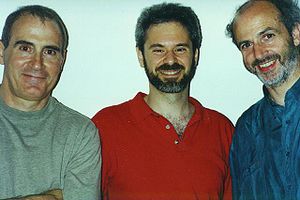 Dan Barrett is the creator and sysop of the Gentle Giant Home Page.

Born in 1963, Dan has been a progressive rock fan for many years but, believe it or not, didn't hear of Gentle Giant until 1987, when a good friend introduced him to The Power and the Glory. And... he didn't like it! But somehow, those complex compositions ingrained themselves on his brain, and today that album is Dan's favorite in all of rock music.

Dan created the GG Home Page while earning his Ph.D. in computer science at the University of Massachusetts at Amherst. Today he works in the software industry. He has written columns and articles for Keyboard Magazine and is the author of several books about computing, including Linux Pocket Guide, MediaWiki, Linux Security Cookbook, SSH, the Secure Shell: The Definitive Guide, NetResearch: Finding Information Online and Bandits on the Information Superhighway, all published by O'Reilly Media.