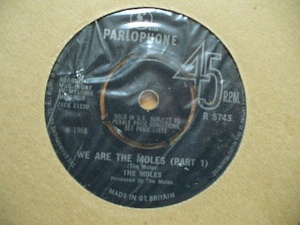 In 1968, Simon Dupree and the Big Sound released a single under the name "The Moles." This was done secretively by putting the tape into a subway locker in London and sending the key to "a major English music publication with a letter stating that the tape should be released on the Parlophone label" [1]. The tape contained the songs:

The identity of the band was not disclosed, and there was speculation that it might be The Beatles. Eventually the secret was revealed.

Both songs were released on Part of My Past.

A bit of trivia: The Dukes of Stratosphear (a pseudonym for XTC) recorded a song called "The Mole From The Minstry" on their first album, "25 O'Clock." (Also included on the CD "Chills from the Chocolate Fireball.) Reportedly it was inspired by The Moles.